The FLASHFORGE Finder is a high quality extrusion technology 3D printer that provides a great learning experience to 3D printing. The FLASHFORGE Finder provides user experiences like no other 3D printer on the market. Its the best and most easy to use 3D Printer with a 3.5″ touch screen and a wifi enabled connectivity to allow you to print from mobile device without a wired connection. Its so easy that even a kid can use!

Flashforge Finder is an easy-to-use, compact and affordable desktop 3D printer suitable for beginners as well as experienced users. Flashforge Finder feels modern, up-to-date and fits perfectly on any desk, in a workshop, hobby room or classroom. Due to its well thought-out design and sturdy chassis, it is both portable and tough. Flashforge Finder is optimized for 3D printing with PLA filament. This Special Edition of Flashforge Finder can also 3D print with ECO Super Premium PLA, ECO PLA Wood, ECO PETG, and ECO TPU (SHORE-values: 95A, 60D, and 64D).

The assisted calibration, filament run-out detection, Wi-Fi support, enclosed USB memory stick and an easy-to-use color touchscreen are some of the features that will get your 3D prints going quickly. It is perfect for situations where a single user or a group of users need access to a 3D printer.

The Flashforge Finder chassis is made of sturdy injection molded ABS composite and is designed to offer an optimized stability and function. The built-in power supply, the filament spool casing and the LCD touchscreen make the machine compact, easy-to-use and easy to transport. No details or components are sticking out from the bounding volume of the 3D printer. 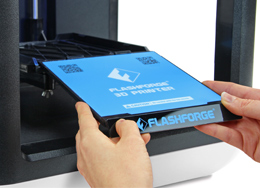 The detachable build plate can easily be slid in and out of its place in the 3D printer build platform. When the 3D print is ready the plate is pulled out and put on a table for easier removal of the printed item.

The build surface of the plate consists of a completely flat glass surface. It is covered with a thick self-adhesive plastic coating on which the 3D print sticks when printed. This exchangeable coating is very durable and lasts as long as it is kept clean. Alternatively, you can 3D print directly onto the glass surface if it is covered with glue from the glue stick. Covering the glass with blue masking tape for the print to stick on also works fine.

The Flashforge Finder build plate is not heated as the 3D printer is optimized for PLA filament prints, which do not require heated build plates. This reduces maintenance and results in faster 3D prints. Operating without the heated plate is also a safety benefit, perfect in a classroom environment.

The build volume is 140 x 140 x 140 mm, which is more than enough for most prints. When bigger objects are to be printed they can easily be sliced up in two or more segments using the attached FlashPrint software. These parts can be printed separately and then connected with glue or welded.

The reliability of a fused filament fabrication 3D printer largely lays in the build plate. It should be adjusted leveled to the X and Y axis and also have the correct distance to the print nozzle. Flashforge Finder has a built-in distance sensor. Combined with the guided instructions on the touchscreen LCD, the build plate calibration is an effortless procedure.

Normally you only need to calibrate the build plate the first time you use the 3D printer. After that, the plate keeps the correct angle and level. If needed the build plate can be re-calibrated for optimum results. 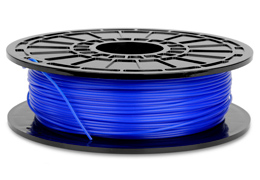 Flashforge Finder has a special holder for the filament spools which are neatly folded into a dedicated space inside the 3D printer. This means the spool does not stick out from the machine and is also kept dust and tear protected.

The spool holder has a built-in filament run-out detection function. If you start a 3D print it can read if there is enough filament available on the spool. If the print requires more filament than what is available the Finder pauses the print. An instruction on the touchscreen lets you refill the filament and the print is resumed from where it was paused.

The filament run-out detection function can be turned off in the settings menu on the touchscreen. Flashforge Finder can also utilise PLA filaments from a range of spool sizes and manufacturers (e.g. 1 kg or bigger) if they are supported and kept up and the filament thread is guided into the 3D printer. 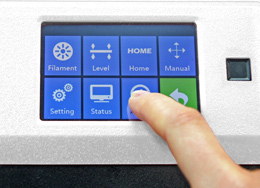 Flashforge Finder has a distinct color touchscreen placed the center top of the printer. Its position and angle makes operating and checking the printer through the screen easy.

The interface with its large icons – including graphics and text – makes the 3D printer easy to use and its settings easy to understand. Via the screen, you can preheat the extruder, start prints from an internal or USB memory file, and also access all of the 3D printer settings.

3D prints on the Flashforge Finder are prepared with the attached FlashPrint software. It is free to install on an unlimited number of computers and is available for both Mac OS X and Windows operating systems. 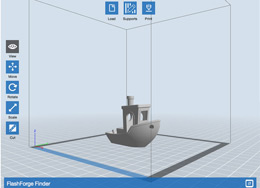 In the straightforward interface of FlashPrint the build volume is represented in 3D, where the 3D models to be printed are imported. All objects can be scaled, rotated and moved as desired onto the build plate within the software. If you import multiple files the software can automatically place them to be aligned optimally.

In FlashPrint there are preset profiles for printing in different resolutions: Low, Normal, High, and Super. If you want you can fine-tune and experiment with the value settings to fit your needs.

The ‘Cut’ function can split up 3D files into two or more parts. This comes in handy when an object is too large for the build volume and needs to print in several passes. In some cases, it can also be useful to split up a model in multiple parts so that every part individually gets printed simpler or faster, e.g. without the need for support structures.

FlashPrint can also open regular 2D images in .jpg, .png, and .bmp formats. The software transforms the 2D image to a 3D model. The pixel brightness (gray scale value) sets the thickness of the 3D model. The user can set size and height of the model. This function makes it easy to make e.g. text signs or stamps from ordinary photos!

FlashPrint creates a 3D print file that is transferred to the Finder before it is printed. This can be done via the included USB cable, wireless Wi-Fi or copied onto the included USB memory stick which is inserted on the side of the printer. Printing the file is executed with touchscreen commands.

Flashforge Finder is based on open 3D print standards which also enables third party software like the function-filled Simplify3D to be used with the 3D printer.